A number of people on Twitter were interested in the setup MICA use for our gear, so I have snapped a few photos to illustrate a pretty typical setup.  I must apologise as many of these photos are pretty blurry; I was on to coffee number 5 by the time I took them.  I didn’t realise just how bad they were until I got them on the big screen at home…

I will retake and re-upload them tomorrow, but at least in the meantime it will give you an idea of things.

It goes without saying that this post is photo heavy, so slow interweb people be warned.

Flashy lights.  Red and blue alternate (except for that rogue grill light that is out of sync)  Highbeams wigwag, and the center of the bar has two white flashers.  Headlights and white lights switch off when the headlights are turned on to stop us blinding people at night.  As with all emergency beacons they immediately render motorists deaf and blind… 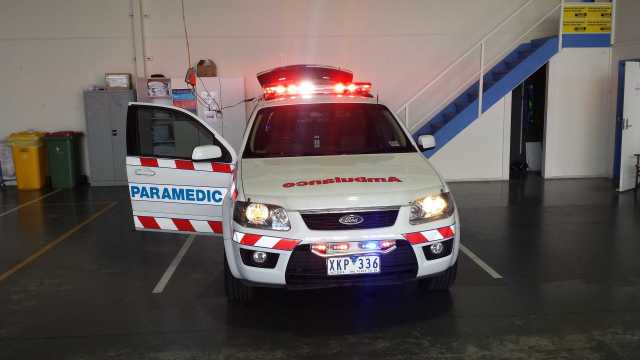 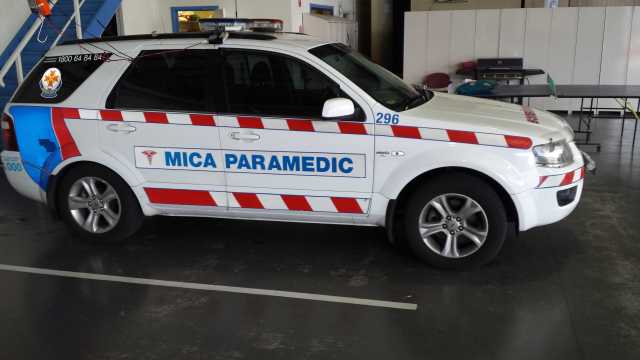 The cockpit.  Mobile Data Terminal has integrated mapping/GPS which gives a route to address automatically.  Phone is handsfree, and is also used for ECG telemetry.  Radio has a foot operated PTT switch so we can keep at least two hands on the wheel and talk about stuff at the same time. 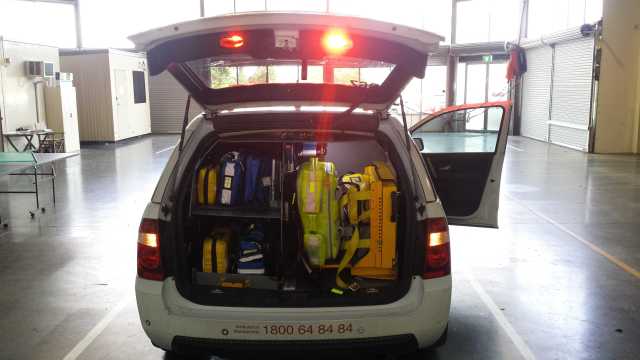 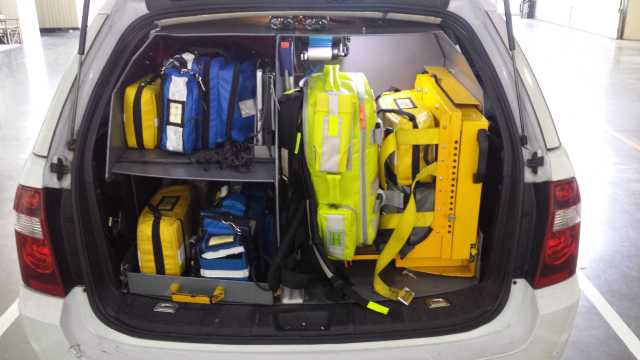 The toys, labelled in their homes. 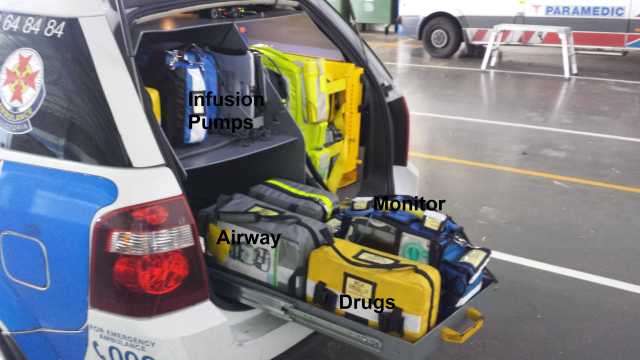 The backpack loading rig.  It slides out and elevates automatically with a gas piston, so one does not have to bend and put it on.  The yellow and grey bags behind it are duplicate drug and airway kits so we can do a couple of decent jobs on the run.  Spare O2 hides behind it.  Of course we will always try to mess up someone elses gear before we go near ours. 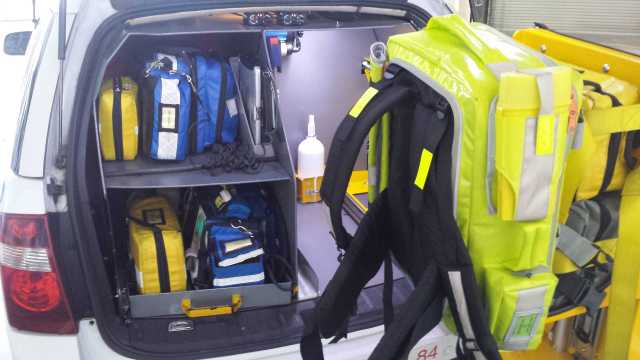 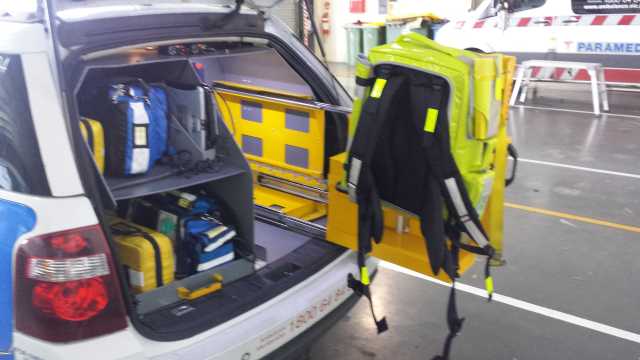 Left rear passenger door holds the drug fridge (with space for a couple of bottles of water) where we keep suxamethonium, pancuronium and cold fluid (do people remember therapeutic hypothermia?  It used to be a thing) 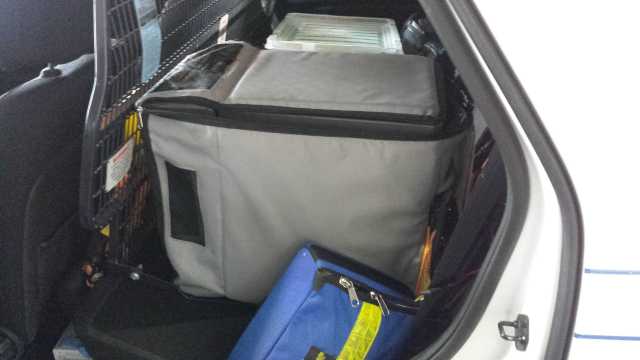 Cold pack holds 2 x 1 litre fluid, as well as a small container for drugs and icepacks to keep it cold outside the refrigerator. 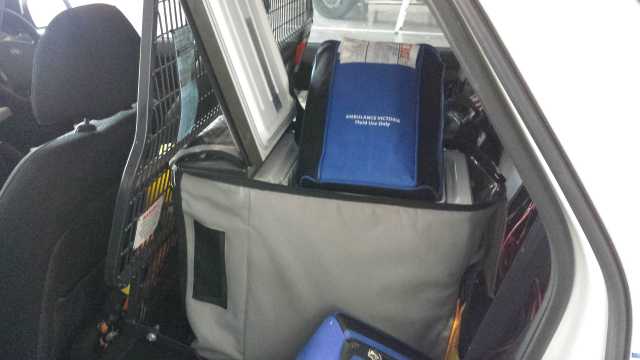 Oxygen backpack.  This is the yellow pack that lives on the elevator thing on the right hand side. 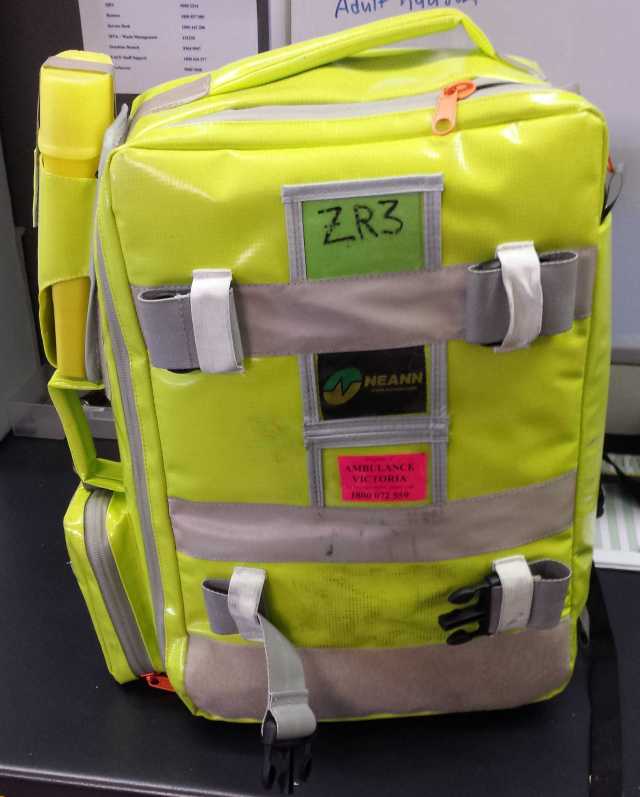 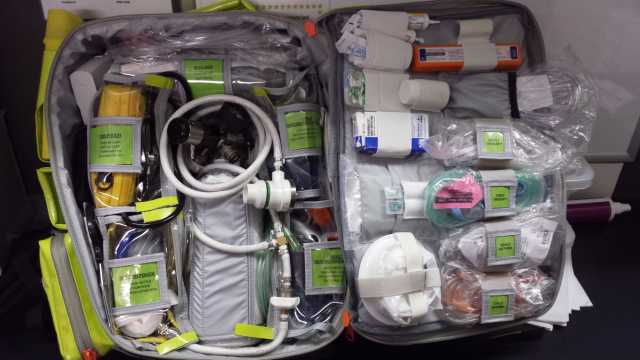 The suction runs off the O2 cylinder, which can empty it pretty quickly.  There is a standard O2 nipple as well as a demand valve that attaches directly to the BVM where the reservoir bag would normally go, thus saving a little O2. 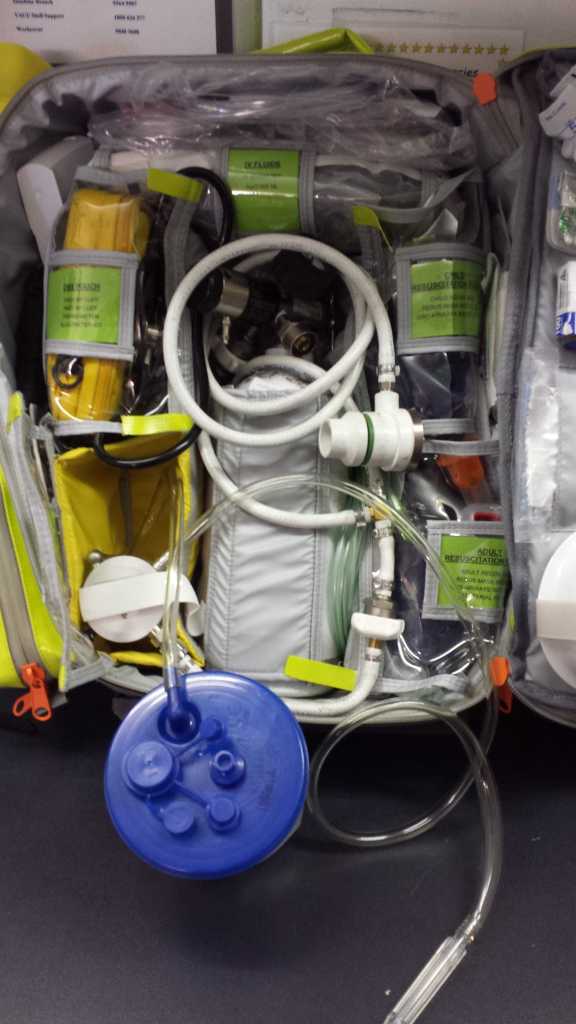 The drug bag.  The connectors on the front allow it to be attached to the oxygen backpack so we can carry it all together on our back if need be. 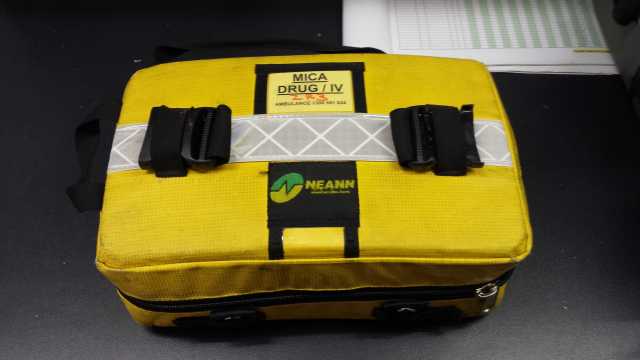 We carry only a 500ml bag of fluid and a 10% dextrose, so have to rely on the proper ambulance crews who work two up to bring us more. 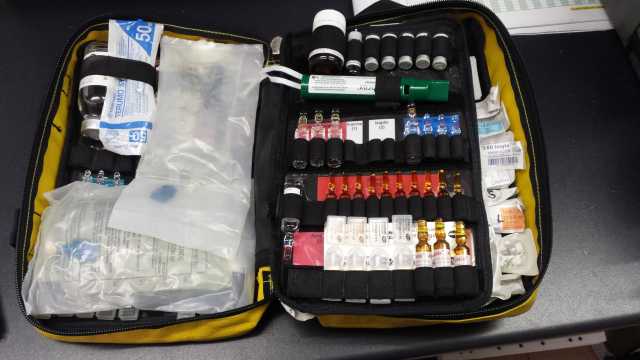 The drugs.  Colour coded for ease of use.  The whistle type thing on the top right is to administer methoxyflurane, which is a volatile anaesthetic used in small doses as an inhaled analgesia. 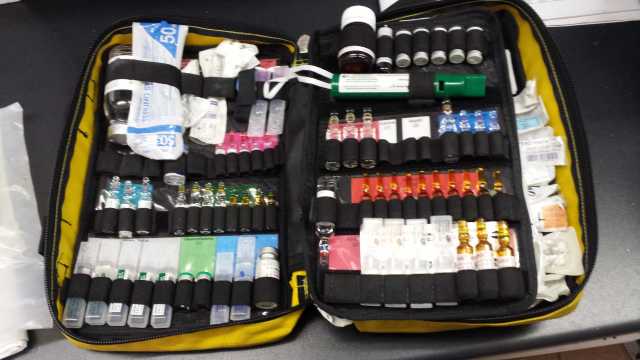 IV gear lives on the other side, along with some spare needles for the IO.  The IO lives in the Philips MRx monitor bag.  I shan’t show the MRx as I hate it so. 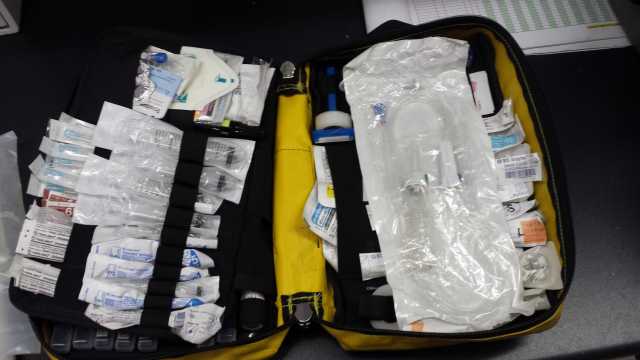 Airway bag.  Straps are again to attach to the backpack. 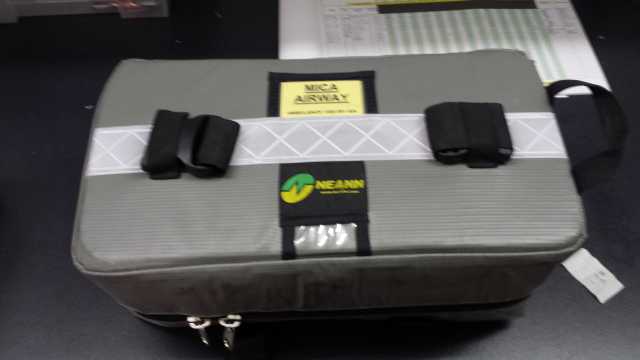 The first compartment on the left holds LMAs and we usually have a couple of randomization envelopes in there for whichever trials we are currently carrying out. 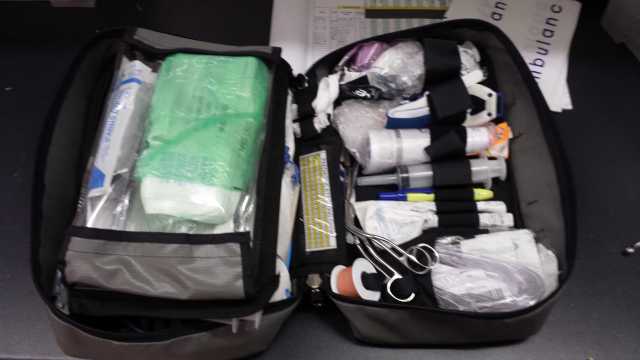 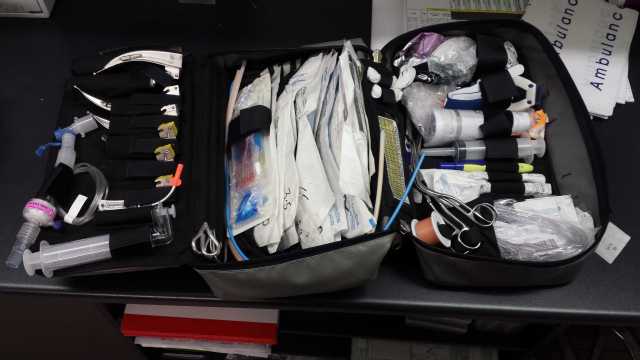 The whole thing folds out to reveal the laryngoscopes (traditional bulb type) and blades, along with the ETTs and our cric kit (terrible seldinger style cric)  Notice the bougie – we have to run it around the bag to keep the business end in good shape.  It often gets mangled, which really gives me the screaming squits.  We also have a small and really, really small bougie for little people.  Behind the tubes are a couple of pneumocaths for decompressing chests. 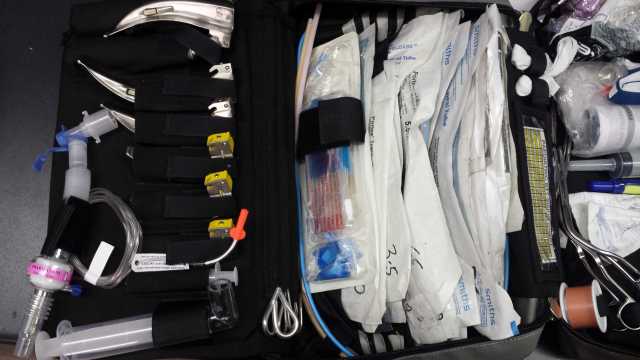 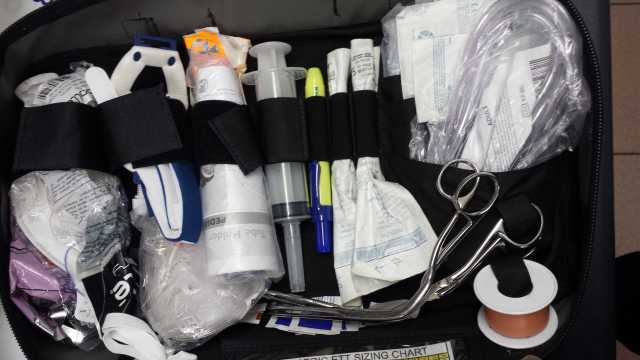 Infusion bag.  This lives on the top right of the cargo area beside the computer.  Note the breakaway power cable on the right side of the bag to keep the gear charging…  The top pocket contains some decent, long pneumocaths, as the ones we carry in the airway bags are no longer than a 14g cannula, and thus won’t work on most of our patients anyway. 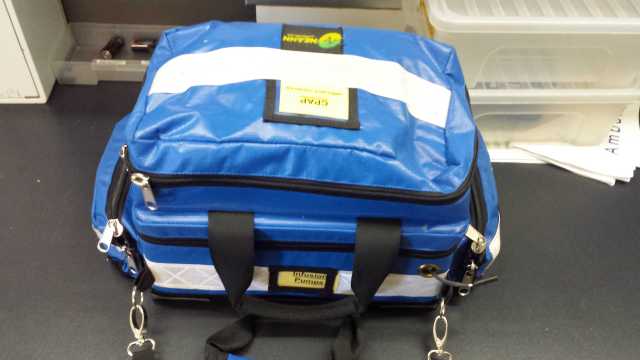 Two syringe pumps, along with D5W, tubing, labels and so forth live within.   Power cables to keep them from running out of battery power live in the side compartments. 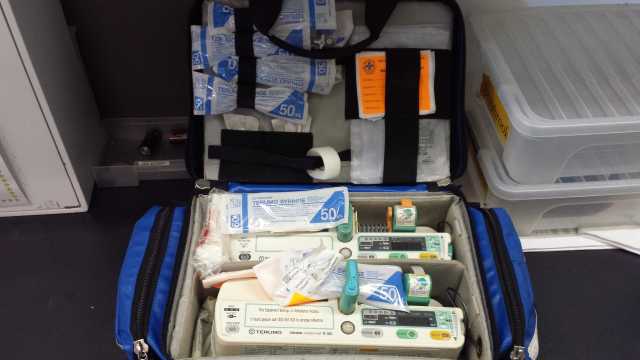 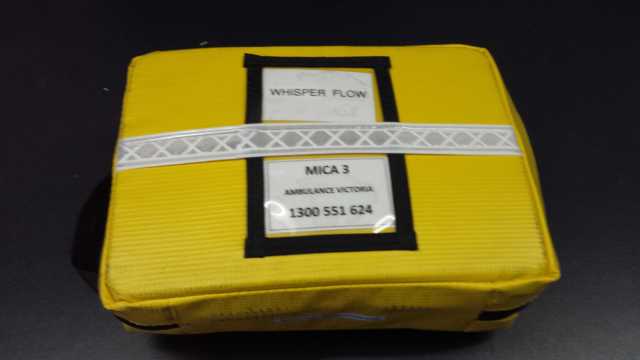 There are actually two units in here at the moment.  The WhisperFlow unit (can’t really see it on the right of the bag under the mask) has fixed pressure and FiO2.  The newer unit allows for adjustment of both pressure and FiO2, and also has a much superior mask, but is very noisy.  CPAP is fantastic. 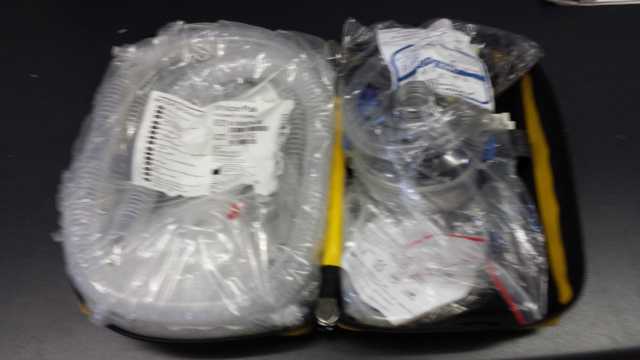 So that’s about it.  It’s not a bad setup, although there is always room for improvement.

Let me know if there is anything else you would like to see.

This entry was posted in Uncategorized. Bookmark the permalink.